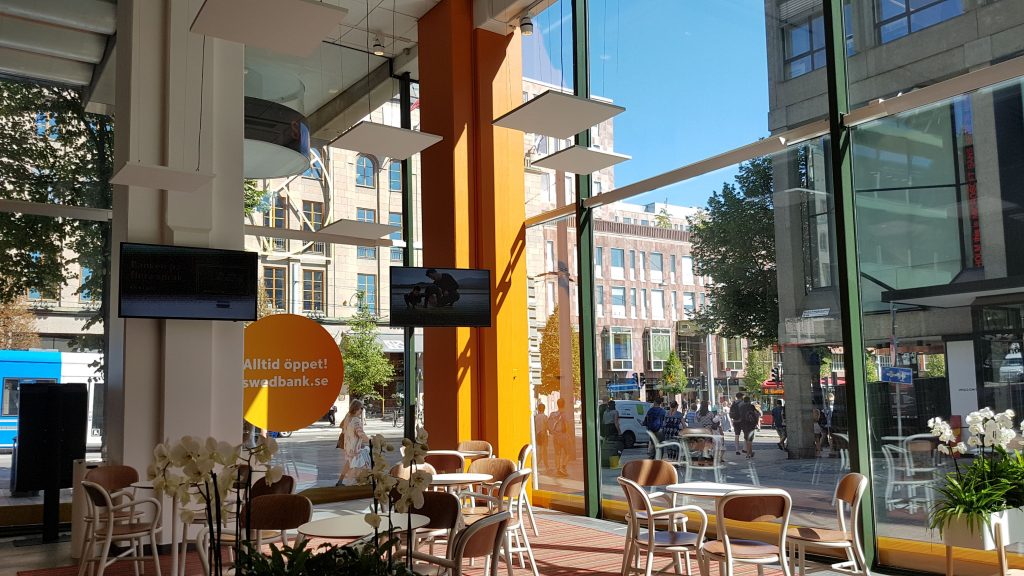 In many public environments customers and staff have to share private information with the risk of being overheard by others. For one of Sweden’s largest banks, Swedbank, Lexter has developed a solution with local sound masking and soundscaping zones that reduces the intelligibility of speech, increases privacy and adds a pleasant atmosphere.

In many public environments customers and staff are expected to discuss and share private information in an open setting, involving a great risk of being overheard by others. This may result in people not feeling comfortable or safe to share private matters, as there is a risk that the information reaches the wrong ears. Swedbank is one of Sweden´s largest banks and it is of great importance to them that their customers feel safe when sharing private financial information at their bank offices.

Lexter was invited to create a sound design solution that could reduce the risk of overhearing. After thorough research of technical options and audio content solutions Lexter designed a concept with local sound masking and soundscaping zones in the most vulnerable waiting areas at the bank.

With traditional sound masking systems (with pink or white noise), you need to increase the playback volume to achieve a significant masking effect, which eventually will cause discomfort for listeners. There is also a tipping point where a general sound masking system instead can cause a Lombard Effect, where people talk with louder voices to drown out the sound masking noise.

To avoid any of the above Lexter created a solution that works on multiple levels to achieve both effective sound masking and a comfortable sound environment for both customers and staff.
Here’s how it works:

Irregular sounds: By emitting a carefully crafted sound production including instrumental, ambient music and nature sounds, the sound masking is constantly changing, increasing the masking effect (as opposed to a static sound such as pink noise).

Frequency: By designing the sound production with a spectral response roughly at a similar curve as human speech, both vowel and consonant sounds in speech becomes less discernible, making the context of a conversation harder to follow.

Psychology: By adding a pleasant and rich soundscape, we give the listener inside the zone something more “interesting” to focus on rather than other people’s private conversations, consciously or unconsciously.

Our testing shows that the sound masking solution for Swedbank significantly decreases the STI value (Speech Transmission Index, scaled from 0 – 1), from 0.9 (no masking) to 0.5 in our testing environment. As comparison, using pink noise instead of our soundscape (emitted at a subjectively tolerable level) only decreases the STI from 0.9 to 0.7.

The effective sound masking zones makes sharing private information safer. Until this day the sound design concept is implemented in more than 50 Swedbank offices around Sweden.