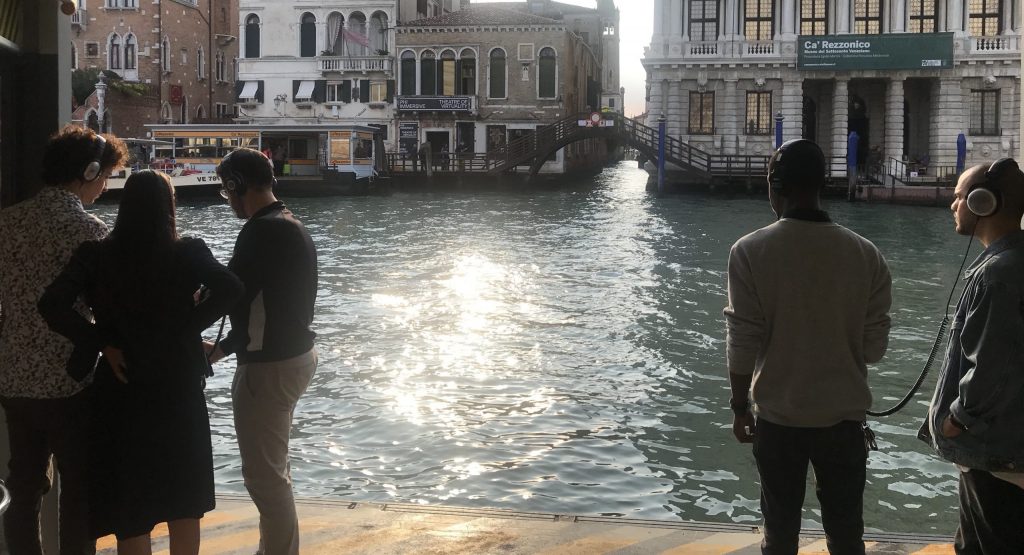 Resounding Venice is a soundscape design workshop designed by Suonifreschi for Palazzo Grassi, addressed to young musicians and architects, which aim is to tune the soundscape of the Canal Grande and ‘make it sound better’. The challenge is to turn the real acoustic environment into a music flow, preserving its natural, unique, venetian morphology.

“Resounding Venice” is an educational activity aiming to enhance sensitivity to urban sonic environment in young musicians and architects, through a soundscape design experience.
The project is part of an educational program, commissioned by Palazzo Grassi, to promote the Palazzo itself and the surrounding urban environment, through actions of collective soundscape design.

The Grand Canal is a unique urban place in the world: it is the main street of the city of Venice, delimited by a continuous curtain of palaces and populated by numerous motor boats. From an elevated point, such as the Rialto Bridge, we see a ballet: the boats move slowly, carefully dock at the piers, each waiting for their turn, remain tied to the pier as long as the unloading and loading operation lasts, and then they start again with a slight acceleration, following the soft and continuous rhythm imposed by the water. Water traffic appears to the eyes as a choreography.

For the ears, however, the soundscape is complex and contradictory. For each boat, the morphology of the sound is rich, varied and articulated in phases, as many as the steps of reaching the pier described above. On the other hand, however, the sonic material is poor and inarticulate, and consists of continuous pads, with a broad and inarticulate spectrum: the result of combustion of the internal diesel engine. Thus the soundscape is complex but at the same time “low fi”, according to Schafer (1977).

If a composer could consider the soundscape of the Canal Grande as a musical score, he would appreciate its macroform (the ballet among the many vaporetti), and the microform (the articulation of the sound of the single vaporetto) but he would probably change the instruments (the sound material). Maybe, Cage would induce us to appreciate the « sound in action » in Canal Grande, as he did in front of the car traffic on Sixth Avenue, while Schafer would invite us to remodel it, as artists, following the “tuning” of the world. “Resounding Venice” embraces both positions and propose to reinvent this soundscape by combining the preservation of macroform and microform with the renewal of the sound material.

The 12 participants of the workshop – musicians, designers, architects interested in urban environment – were addressed to this goal: During the 4 sessions, they studied the soundscape of the Canal Grande overlooking Palazzo Grassi to understand its macroform and microform and then focussed on sound production. According with the guidelines, they didn’t replaced the sound of the boat: they recorded it, processed it with multiple processing techniques and finally “tuned” it: in this way the sound morphology was preserved, while the material was renewed. The final audio result was publicly presented in the Teatrino of Palazzo Grassi, and projected at the center of a quadraphonic audio set-up, to offer the unique listening experience, virtually placed at the center of the Canal Grande.