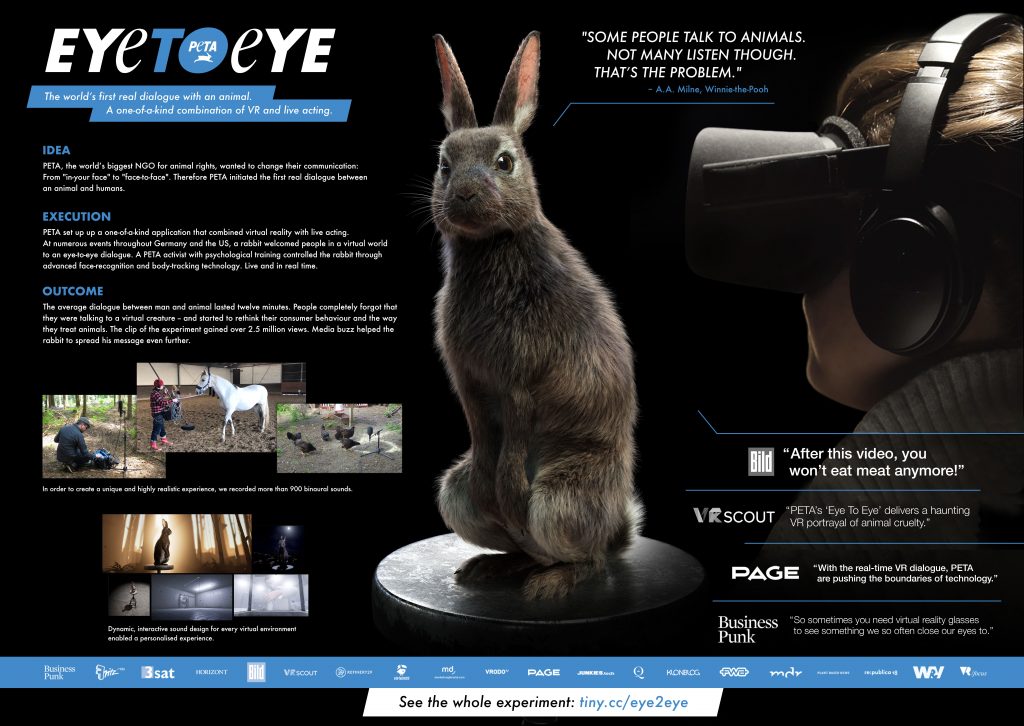 For the world’s first real dialogue between an animal and humans we implemented a dynamic audio concept from the ground up. From binaural 360° sound design over loop-free and dynamically evolving music to capturing and transmitting the user’s as well as the actor’s voice, our goal was to provide a realistic sounding and captivating sonic immersion.

For the Virtual Reality Live Acting Experience “Eye to Eye” – the world’s first real dialogue between an animal and humans – we devised and implemented a groundbreaking dynamic audio concept from the ground up. Our main goal was to create a tangible audio environment that places the user-driven dialogue at the center of the experience, subsequently branching off to various possible scenarios and events – containing interactive sound elements which amaze, shock and impress the user through absolute sonic immersion, evoking an immediate emotional response and individually changing each user’s view on animal cruelty.

Three elements were of particular significance to accomplish this purpose: A loop-free and interactive dynamic sound design and music concept, authentic sounds and instrumentation and targeted binaural / 360° recordings. By means of various game engines, we developed dynamic music and sound design scenarios for the various rooms visited during the experience. Dynamically programmed sound events – modified by the actor during the session, or randomized by programming – ensure that no repetition in sound and music occurs over the entirety of the user sessions.

To achieve a 100% realistic imaging and implementation, we recorded animals in their natural environment over several weeks, making use of state-of-the-art ambisonic microphone technology. For the scene in a circus cage, we captured various performances of Germany’s last barrel organ orchestra. Everything was then mixed as 3D sound events which binaurally translate on custom noise-canceling headphones, creating true 360° sonic immersion with interactive elements.

Finally, to bring the application to conventions, festivals and concerts, we designed a mobile sound-proof VR booth with a one-of-a-kind live audio setup. In real time, the actor uses a customized foot switch system to trigger events and room transitions. Hands free, the actor engages in dialogue with the user through a unique microphone array feeding into the game engine, lending his voice, facial expressions and gesticulation to the computer-generated rabbit.

“Eye-to-Eye” sets new standards – not only for virtual technology or NGO communication. The application offers a unique tool which can be used as a conversational platform like never seen before. Since the experience differs from user to user, the length of conversation lasted on average over 10 minutes per user: a new benchmark in Virtual Reality. “Eye-to-Eye” premiered at re:publica 2018 and has since been exhibited at conventions, festivals and fairs around the world. Social media influencers shared their experiences with the application with the internet, amassing over two million views and spreading wide recognition for the emotional impact of the experience. Ported to a WebVR app for smartphones, the application is now available to a wider range of users.