Where The Light Guides You 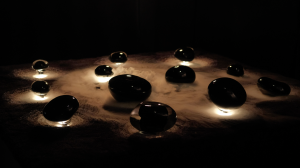 Nominated in the categories

Lexter assisted Swedish music artist Eva Dahlgren and designer Alexander Lervik in creating a design project and an exhibition where glass, light and music touch all senses. To create a unique experience, we contributed with conceptual sound and scent design to the exhibition, first shown at the Design Gallery during Stockholm Design Week 2017.

Can an innovative approach to sound, music, acoustics and technology create new dimensions and possibilities in an art exhibition, allowing more senses to be touched by the same piece of art?

When Swedish designer Alexander Lervik was asked to create an exhibition for Stockholm Design Week, he knew he wanted to do it with someone with a completely different artistic focus. One day while running with music in his ears, a song by Swedish artist Eva Dahlgren came on and he immediately knew she was the one he wanted to create it with. So he wrote her a letter and some days later the project began.

The idea of music meeting design evolved and we were brought into the project early on to make the exhibition a unique audio experience. The project, that we worked on for eight months, was based on an English adaption of one of Dahlgrens Swedish songs from the album Jag sjunger ljuset (I sing the light), translated and produced in an entirely new version, tailor made for the exhibition. Each instrument group in the production was the inspiration for the respective five parts of the exhibition, represented by glass sculptures designed by Lervik. The ”orchestra” featured the vocalist, drummer, bass player, violinist and the synthesizer.

The idea was to allow the visitor to view the sculptures while at the same time hearing only the corresponding part of the music. The music should also play in sync with each sculptures light installation. Our first challenge was to make this possible at the limited space. How would we avoid sound leakage between the sculptures, without resorting to headphones? Another challenge was finding a solution that preserved the sound quality and musical expression of Dahlgrens music. Yet another challenge was to provide a way for the music parts to play in sync rather than individually (e.g. from individual media players).

By placing directional sound showers near each sculpture, connected to a multichannel audio interface, we managed to create acoustic ”rooms” around each sculpture where only the corresponding part of the music could be heard. At the same time, all parts played in sync along the same linear timeline. An additional channel was used for a subwoofer, playing non-directional sub frequencies heard at all sculptures, synchronizing and framing the complete listener experience. Lastly, we used another channel to communicate with the the lighting. This allowed the visitor to experience unique multi-sensory sections while at the same time consuming a sensuous, magical overall installation.

Together with Dahlgren, we remixed and adapted her composition, carefully adjusting it for the multichannel sound shower installation. Careful consideration was also made regarding how to allow the music to come into its own in the installation. The exhibition was a success and drew much media attention for its multi-sensory approach and the interest in taking the exhibition further has been significant, starting at renowned Bukowskis this summer.