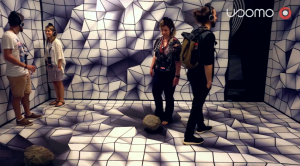 Winner in the categories

Outset
Immersion – the connection of space and user by media – has to date always been created with visual means: projection mapping onto architecture, light installations and 360° filmic spaces.

Idea
We wanted to create this immersive effect solely by acoustic means. Providing an individual sound experience for each user was our main goal, just as much as the sound being fully in tune with the visuals. Even in small areas within the space, we wanted the sound to be fluidly changing along with the visuals and the surroundings. We wanted all objects in a space to sound, influencable by the user. And we wanted spatial acoustics to be freely definable in order to flexibly design spaces. Like immersion is created visually with 360° projections, we wanted to create it acoustically, altering the perception of the space on the audible level.

Solution
With usomo, it is possible to immerse oneself in fully individual soundscapes that seem to bend physical laws. usomo generates sound in real time and sends it individually to each user, completely independent of other users’ sound experiences. In order to not affect the others and to maximize the immersive impact, the sound is transmitted via headphones.

Additionally, the system is able to exactly determine the movement of each user. To achieve this, we developed our own tracking system that calculates the precise position and rotation of each user at an accuracy of 10 cm and 1°. The tracking module is attached to the headphones, and the sound is stored on an accompanying smartphone, played back via a software that was specifically developed for the most part by ourselves.

The software is able to generate virtual sounds punctually or spatial. All sounds have changeable properties. With every movement of the user, the sound effects such as volume or tonality constantly change. Because the transmission of the sounds is calculated binaurally, the locations of soundsources are clearly identifiable by the user. usomo can also be synced with screen-based or projected films, creating surprising and individually explorable soundscapes that morph at every move.

usomo does not need servers or other additional devices – it is very simple to install and maintain. There is no limitation to the size of the space or to the number of simultaneous users. We have derived and registered several patents from the development of the system.

Results
The effect that usomo has is much more impactful than imagined. usomo revolutionizes the perception of interior space. Users can now explore spaces acoustically at a new level of sensory awareness. The system is easily comprehensible and does not need any explanations, as it works intuitively. It enables completely new ways to create and design acoustic spaces – immersive and interactive.