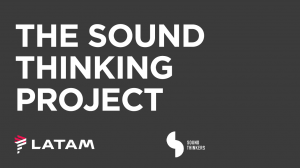 Winner in the category

The merger of LAN (Chile) and TAM (Brazil) created LATAM Airlines, widely recognized as Latin America’s leading airlines. This new brand was born with a big challenge: to create a unique and also plural identity that represents the whole continent. We helped create this genuinely Latin-American brand through sound.

The merger of LAN and TAM created LATAM Airlines, widely recognized as Latin America’s leading airline. This new brand was born with a challenge: to create a unique identity that represents the whole continent. The Sound Thinkers assembled a team for the project, traveling to six cities in Latin America on board LATAM’s aircrafts. A profound immersion into the Latin DNA. With the data generated by our Sound Perception Matrix, we identified every sound impact during this journey, mapping the whole experience.

The main findings were:
– The musical dimension of the brand was mostly folkloric content;
– Lack of unity and intelligibility in the brand’s communication;
– The Latin Americans do not have a common identity. Despite many similarities, people tend to perceive only the differences.

After gathering all the information, we were able to define and develop the brand’s DNA creating the Meszcla concept, which consists in discovering and mixing new sounds, also feeding the touch points with its customers. The words “mezcla” and “mescla” both mean “mix” in Spanish and Portuguese.
It symbolizes what Latin Americans have in common, but also, their differences. Music became our main vehicle in the process of making LATAM the ambassador of a nonstereotyped latinity.

We designed LATAM’s desired music territory with contemporary aesthetics, mixing Hispanic and Brazilian textures. With the help of a doctor in music and cognition, we identified one common aspect to most Latin American rhythms: the tresillo. A rhythmic subdivision that is behind bossa nova, tango, salsa and much more. Instead of focusing on specific styles, we considered all the possibilities that tresillo affords and then added worldwide sounds, so every musical production by LATAM is based on a culture mix. Inspired by this concept, LATAM’s sound logo consists of a short five notes motif with a specific rhythmic profile, timbre and instrumentation. This is how Meszcla happened.

Voices, recorded or live, are part of LATAM’s Sonic DNA. LATAM’s desired vocal territory has a conversational and human tone with neutral accents in Portuguese and Spanish, but a slight Latin accent when speaking English is encouraged. We defined vocal characteristics such as speed, pitch, intensity, and articulation. The nonmusical aspects are directly connected with how the LATAM passenger’s experience should be. LATAM’s nonmusic territory has a balance between silence and noise: silence when consumers need to relax, music and voice when they need to feel safe.

We’ve oriented the company in main aspects as the correct placement of speakers and microphones, acoustic treatment, training for equipment use, volume control and recurring maintenance. In conclusion, we were able to create a Sonic DNA and design the whole brand experience through sound, compre-hending all touch points. Every sonic manifestation contributes to the brand experience and helps deliver value to its customers.