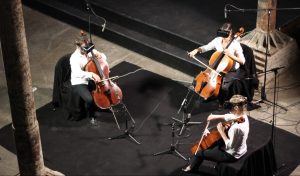 Nominated in the category

Collide is an experimental approach using latest technology to combine aspects of synesthesia with contemporary composition methods. The setup consisted of an open score, the Collide visuals, three Oculus Rifts and three cellists in a classic recording setup. The sound was then enriched and collaged into a ten-minute track for a 52-channel Dolby Atmos® sound system at the Dolby Gallery in San Francisco.

“Collide: sound conducted by movement through VR”
Dolby Gallery has a 52-channel Dolby Atmos sound system. Onformative partnered with us to develop a Sound Art piece for the exhibition at Dolby’s showroom in San Francisco. The commissioned work responded to a theme of “Dance Techniques”, presenting performance and dance as art forms that allow sound to be visualized. The work should expand the potential of the body/sound relationship using new technologies to create a work that connects analog movement makers with digital environments.

We wanted to reverse the approach of bringing content into Virtual Reality. How to feed something into reality from a virtual experience? How could we influence our art by using VR as a tool? Having the previous questions in mind, we developed our sound concept based on a video made by our visual partners, Onformative. Their video was an abstract visualization derived from tracking-data they collected from dancers.

Our intention was to play with the concept of synesthesia. Three cello players where then to be conducted by this abstract video shown through the VR-Goggles. Colors and movement were to be the score for the sound/music we wanted to record. The entire ambient sound was designed to evoke the innovation and brand communication behind Kuka. This feeling was delivered by turning the space into holistic and intelligent brand experience. The composition used in subtle way elements of the brand melody to encourage the recognition of the brand without been to aggressive or obvious. The idea was to have a subconscious connection to the brand through the sound.

The soundtrack to Collide is an experimental approach using latest technology to combine aspects of synesthesia with contemporary composition methods. The setup consisted of an open score for three celli, the Collide visuals, three oculus rifts and three cellists in a classic recording setup. The composition was a set of harmonic and rhythmic rules that was simple enough to memorize after a few repetitions.The instrumentalists put on the VR-goggles while playing the piece by heart. Each player saw only one third of the wide Collide visual, one left, one middle and one right.

Since the composition only gave an open frame of what to play, the visuals in the goggles functioned as conductors to the ensemble. Depending on color and motion in the films, strong shifts in dynamics and tempo occurred in the piece. Sometimes almost parallel for all players, sometimes very different from one another. The recorded material was then edited, enriched and collaged into the final format, a ten-minute multichannel track that played on the 34 speaker/17 subwoofer spatial sound system provided in the Dolby Gallery, San Francisco.

Our Sound Art design was exhibited for 3 months in San Francisco at Dolby Surround’s Showroom. Collide has also been exhibited in Istanbul. It was presented in the Nonspaces exhibition between December 16, 2016 and March 3, 2017, curated by Ceren Arkman und Irmak Arkman von GRID Istanbul.