The participants have the possibility (but are not obligated) to choose and score one or several film scenes in advance, which will be discussed during the workshop. The provided film scenes deal with different emphasis, such as main title, different era or culture (such as Far East etc.), dialogue, underscoring etc. 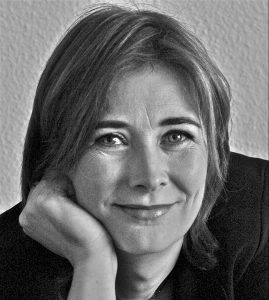 Christine Aufderhaar graduated from the Conservatory Lugano in classical piano performance (piano class of Nora Doallo, composition class of Paul Glass). Upon completion, she attended the Berklee College of Music in Boston and graduated in Film Scoring and Classical Composition in two years instead of the usual five years, receiving “summa cum laude”. Shortly there after, she moved to Los Angeles and worked within a ‚Mentorship Program of the Society of Composers and Lyricists’ with leading composers such as Alf Clausen (The Simpsons), Jay Chattaway (Star Trek) and Steve Bramson (J.A.G.).
Christine Aufderhaar was honored with awards and scholarships in the USA, Germany and Switzerland. Her compositions have been performed in the USA as well as in Europe. In 2007 Christine was selected by the “Federation of Film & Audiovisual Composers of Europe” as “European Composer 2008 for Switzerland”. She currently lives in Berlin, where she writes and produces music for film and television. She is member of the German Film Academy and of the Academy of German Music Authors. From 2004 to 2008 she was Associate Professor at the ‘Hochschule für Film und Fernsehen’ (HFF Konrad Wolff) in Babelsberg (Berlin) in the film scoring department.