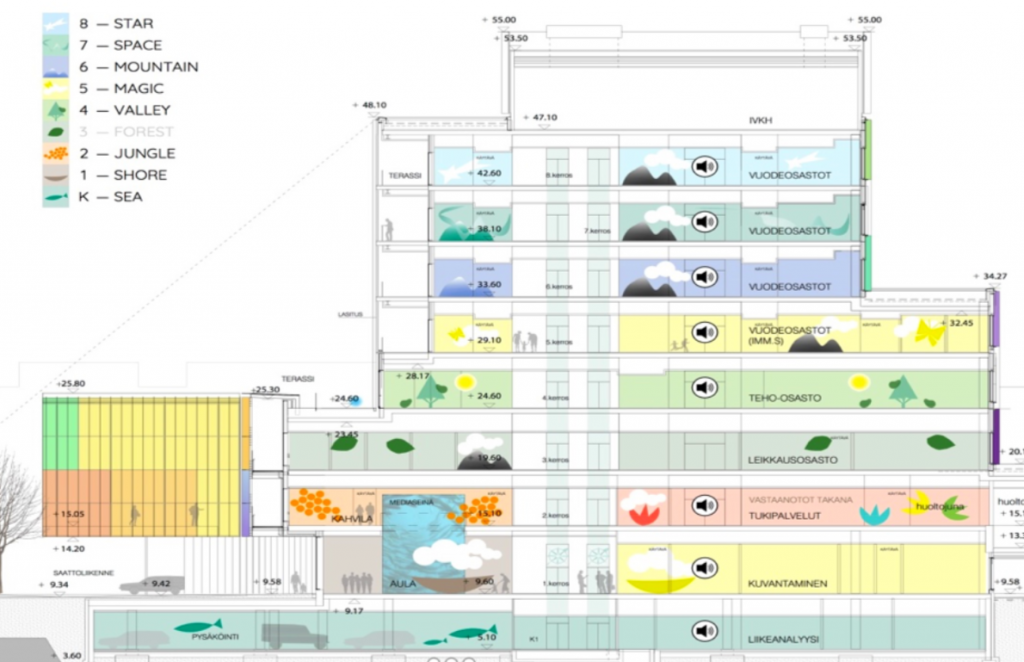 The soundscape for New Children’s Hospital Helsinki has been developed by lecturer Antti Ikonen and Sound in New Media MA students of Aalto University. The soundscape follows the visual themes of each floor creating a soothing sonic environment for the children and staff and are played through 60 loudspeakers placed in lounges of the hospital.

The New Children’s Hospital in Helsinki is the largest children’s clinic in Finland. The sound design project was developed and implemented from September 2017 to August 2018 by Sound in New Media MA students of Aalto University’s Media Lab under the mentorship of university lecturer, Antti Ikonen.

Some of the questions that were considered while designing the sounds are as follows:

Set up
The sounds are playing from a MAX patch. The entire patch set up has been divided into several modules as follows:

Loudspeaker arrangement
Genelec and Panphonics, two Finnish loudspeaker manufacturers donated 60 loudspeakers in total which were placed in the different lobbies and corridors of the hospital. The sound system is entirely operated from one computer feeding all the speakers over the hospital’s IP network. Through this set-up, it was possible to assign details of the soundscapes to any of the 60 speakers.

The main technical challenge was to debug the digital audio signal chain from the computer through several hardware routers and interfaces all the way to the loudspeakers. According to the hospital representatives, the soundscape has been playing seamlessly 24/7 since the opening of the hospital in September 2018. The next phase of the project is a thorough survey on how patients, their parents and the hospital personnel are experiencing the soundscape.

More details and excerpts from the soundscapes can be found here.